Spend an incredible week on this beautiful Indonesian island full of culture and picturesque beaches. Explore the rice paddies and historic temples sprinkled around the island. Cook, dance, party, and rejuvenate yourself on the sands of Bali. 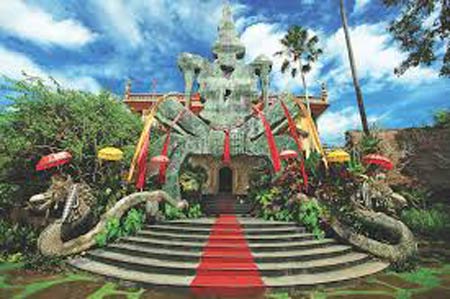 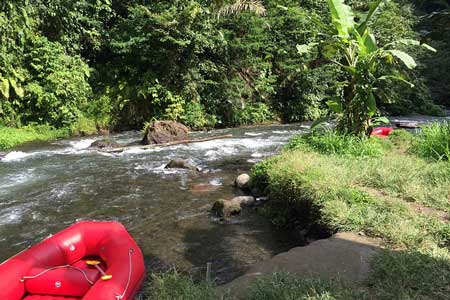 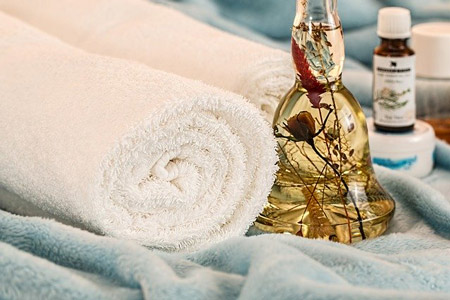 Selamat Datang and welcome to Bali – island of the Gods. Upon arrival you will be picked up and transfer to Ubud. Your group leader will have a group meeting in the evening and followed by dinner in a Balinese restaurant.

Today after breakfast you will head to Tabanan Regency, Tunjuk Village where you will trek through the rice field and see the local farmer do a traditional plowing by the cows before they start to plant the rice. You may get involve on this activity. The trek will pass through coconut plantation where a local will show a coconut tree climbing attraction. Young coconut drink is served here as refreshment. Then you will walk along the village while enjoy the village atmosphere and activities. Reaching the other side of village, you may get involve with a Balinese family in making offering and jajan (Balinese rice cake). A traditional set menu lunch is served with a Balinese family before of your trek at the local house.

Before heading to Ubud, you will also visit Taman Ayun, is a compound of Balinese temple and garden with water features.

The first stop is the10th century Tirta Empul temple is silent witness to the old Balinese kingdom years, particularly the Warmadewa Dynasty. The main highlight here is its collection of freshwater pools, lined with over a dozen fountains where pilgrims wade through and seek spiritual purification by ritually praying and going under each fountain in succession. Afterwards we stop at Gunung Kawi a collection of ancient shrine reliefs carved into the face of a rock cliff.

Later we will visit Goa Gajah known as the elephant cave the 11th century site was excavated in 1954, and you can peek inside the shallow cave to find stone idols and indentations that serve as seats for meditating priests.

The Afternoon is free for you to explore on your own – take a massage or Yoga lesson or just laze by the pool. Your leader will be able to give some great suggestions.

In the evening, the leader will pick you and bring you to Kecak Dance Performance. A magnificent dance with human chanting tells a Ramayana story.

Today after breakfast and leaving Ubud, we head to Candidasa where the you will explore the area by bike for approx. 2 hours, cycling through the beautiful rural countryside of Bali, rice-fields, plantation and ends at White Sandy beach. Enjoy the light lunch by snack on the beach, afterwards continue the trip to Tirtagangga Water Palace where the lunch will be provided. After lunch explore the water palace and you may swim in the water spring pool at your personal account.

Then continue the trip to your hotel in Candidasa.

Today you will leave Candidasa and heading to the starting point of rice terrace trekking behind the Tirtagangga Water Palace. You will walk through the rural countryside, rice terraces and local village for approx. 2 hours. Afterwards you will also explore the water palace. Tirtagangga, is a maze of pools and fountains surrounded by a lush garden and stone carvings and statues. The gardens were designed and constructed in 1948 by Anak Agung Anglurah Ketut Karangasem (1887 – 1966), who was the last Raja (King) of Karangasem. The centerpiece of the palace is an eleven-tiered fountain.

Then continue the trip to your hotel in Amed, along costal strip fishing village of the eastern part of Bali.

Today after breakfast the leader will take you to the water, you will meet with the snorkeling guide who will bring explore the under water on the 2 locations which will be based on the tides and the snorkeling & swimming ability of the groups, it will be on Jemeluk Bay, Japanese Shipwreck or USA Liberty Shipwreck.

In the afternoon will be free at leisure. You may enjoy and relax by the beach or book for Spa Treatment at your option.

Today you will leave Amed and heading to Seminyak, an upscale popular beach destination, filled with colorful bean bags sunset bars, beach clubs, designer shops, galleries and restaurants, this is the place to be the last nights in Bali. Upon arrival you will be prepared for Yoga Class. Afterwards, the Leader will bring you to the one of the Beach Club and witness the sunset.

After breakfast you will be picked up for Surf Course. The course focuses on basic surfing technique, paddling, popping-up, wave riding stance, turning your board on the wave, ocean knowledge and safety. After taking this course you’ll be surfing beach break waves, feeling comfortable in the ocean and know the correct surfing etiquette. After the activity you will be drop back to hotel and enjoy your free at leisure until dinner time. A farewell dinner will be provided.

Today you may explore more about Seminyak on your own. Just sit back and relax in the swimming pool, or walk to beach, take a massage or do some last-minute shopping on the last day in Bali.

Today your trip come to an end. At appropriate time you will be picked up and transfer you to the Airport. Safe journey to your next destination.